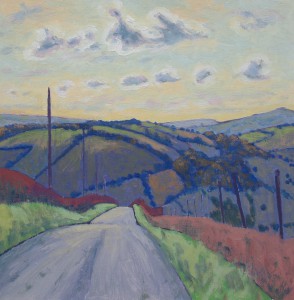 It seems to me that I've always drawn and painted ever since I was a small boy.

As I went through school it became clear I was going to pursue Art one way or another even if I had to take a job to help things along. That I did in graphic design and printing. I painted in my spare time of which I had plenty. I first sold a painting in 1974. It was 1989 before I decided I could no longer work for anyone else and went full time.

I've had no formal art training but knew what I wanted to do so got out in the field and taught myself to really look and then draw and paint, and that's what I'm still doing. One should never stop really looking.
My interest in the landscape began very early. I spent many hours either on my own or with a school friend walking the fields and woodlands around my home.

Watching wildlife led to me taking a drawing pad with me in the hopes of capturing some of what I saw. As birds and mammals were always on the move and difficult to observe and draw as well I spent much time drawing the trees and fields etc. I began painting in oils in 1972.

I continue with land and seascape but realised my main focus was creating an atmosphere with the careful use of colour to express a sensation of light. I am also drawn to describing the qualities of water in all it's forms and locations from snow and puddles to sea and rivers.

I paint en-plein-air all year round. Most of my work is produced in this way. I exhibit in Cornwall, Isle of Wight, Guernsey and occassionally in London. I also show in various exhibitions in the South and South West.

In 2017 I was elected to the South West Academy of Fine and Applied Arts as an Associate member.